5.3.1 Outline how population size is affected by natality, immigration, mortality and emigration.
5.3.2 Draw and label a graph showing a sigmoid (S-shaped) population growth curve.
5.3.3 Explain the reasons for the exponential growth phase, the plateau phase and the transitional phase between these two phases.
5.3.4 List three factors that set limits to population increase.

5.3.1 Outline how population size is affected by natality, immigration, mortality and emigration.

Group of individuals of the same species that have the potential to breed with each other.

Natality: increases population size as offspring are added to the population.

Immigration: increases population size as individuals have moved into the area from somewhere else and so this adds to the population.

Mortality: decreases the population as some individuals get eaten, die of old age or get sick.

Emigration: decreases the population as individuals have moved out of the area to go live somewhere else. 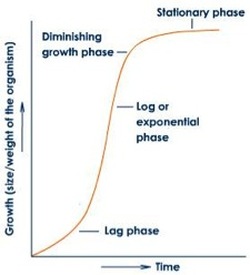 Draw a diagram and explain the shape of population growth curves

Diagram: curve is sigmoid (s-shaped) and labelled with population/size/number on y-axis and time on x-axis; three regions/phases labelled exponential (could include curvature at start), transitional, plateau;

5.3.3 Explain the reasons for the exponential growth phase, the plateau phase and the transitional phase between these two phases.

Initially, population growth may be slow, as there is a shortage of reproducing individuals which may be widely dispersed
As numbers increase and reproduction gets underway, three stages of population growth are seen:
Exponential phase:
1. Rapid increase in population growth.
2. Natality rate exceeds mortality rate.
3. Abundant resources available. (food, water, shelter)
4. Diseases and predators are rare.

Plateau phase:
1. No more population growth, population size is constant.
2. Natality rate is equal to mortality rate.
3. The population has reached the carrying capacity of the environment.

The limited resources and the common predators and diseases keep the population numbers constant.

Every species has limits to the environmental conditions it can endure changes in some factors can lead to limitation of population size.
1. Increase in predator and parasites
2. Availability of shelter and water
3. Climatic changes
4. Shortage of food supply
Some of these factors are density-dependent, while others are unrelated to the density of the population.